An Adcon meteo station equipped with a total photovoltaic radiation sensor can prove itself as very useful in the appreciation and permanent management of the efficiency of a photovoltaic park. The LP02 total radiation sensor (near the solar panel on the mast in picture and in a closer view here-below) has a perfectly flat response over the entire range of solar radiation wavelengths and also has a massive glass dome that ensures equal sensitivity towards any possible direction where the sun could find itself.

6,776.3 W/m² represents the sum of solar radiation intensities measured by the system at every 15 minutes along the day of 24.12.2015. Multiplication of this figure with 1/4 hour has as its result a rough figure for the total energy delivered by the sun during that entire day through a 1 square meter frame able to always face the sun. 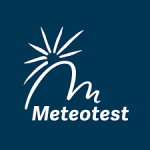